The Mystery of the “Two Rein”

The Philosophy Behind the Practice

I leaned on a fence rail of a weathered set of corrals late one afternoon, standing in the slim blade of shade a gate brace reluctantly threw down. The heat of the day was evaporating into the thin Nevada desert air. Just as soon as the sweat dried, I would be needing a coat. I swilled the dust down my throat with the last of a beer and settled in to watch the crew work off the last of a truckload of dry cows.

Several of the buckaroos fiddled with their colts, correcting and directing them in a snaffle bit. What drew my eye, however, was not the work on the colts but two cowboys in the far pen. They were riding their horses in the “two rein”, holding to an age old tradition born of logic and sensitivity. Watching them was a joy, as they expertly lead their horses into the next level of training. What a shame it was, I thought, that this delicate practice had become so rare. 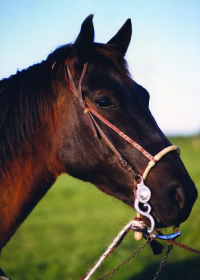 The “two rein” process is a practice developed to bridge the gap from hackamore to bridle bit. Great basin buckaroos as well as traditional old school California horsemen keep the practice alive. They have found, through trial and error, that it is the most efficient, thorough method for moving up the training ladder. The practice incorporates the use of a small underbridle bosal with an equally small hair mecate (pronounced “McCarty”) worn and used simultaneously with a bridle.

The idea is simple and logical. In the first stages of the “two rein” process, the horseman uses the mecate to ask and direct the horse in his various maneuvers. The bit merely rests in the horses mouth while he learns the feel of it, to pick it up and carry it, slowly finding comfort in it. Over time, the horseman will gradually ask for the same maneuver with the reins of the bridle while concurrently supporting the message with the more familiar mecate and bosal. As the process progresses, the horse will begin to associate the maneuver with both signals and then finally will need only one, the bridle.

Though the buckaroos I watched were both riding their horses in the “two rein” each used there equipment differently. One of the horses had just been introduced to the “two rein”, this was only his third trip in it. The cowboy had adjusted the handful of reins in such a way that the mecate engaged first when he picked up on it, with bridle reins hanging balanced below it.

The other horseman was close to putting his horse “in the bridle.” The mecate hung limply as the majority of signals came directly down the bridle reins to the bit. The mecate was only picked up now and then when a cue went unnoticed of the horse became muddled or confused.

The buckaroos worked their hands over the two sets of reins quietly and deliberately. Small movements, asking and suggesting while other movements backed up the first and clarified the signal.

It is very similar to the process of, say, an English speaking person learning a foreign language. An English word is spoken then the foreign word is presented. At first, both words will have to be repeated quite frequently, always appearing together. Gradually the foreign word is learned and used. The “two rein” process of transforming the hackamore horse into a finished bridle horse is no different.

I relaxed in the shade and marveled at the process. The transition from hackamore to bridle could be as clear as the crisp Nevada air if we only took the time to learn the “two reining” process and use it.

Understanding how it is designed to function dispels some of the confusion. It is not a difficult process but does require time and effort to learn, thought and patience to practice. As always, knowledge is power. Spending some energy in an effort to understand the elements involved breaths life back into the practice.

The Hackamore: The Bosal

only marked difference being their size, weight-diameter and subsequent flexibility. The hackamore is to be used alone, is larger in diameter and generally firmer, though not stiff. The bosal is considerably smaller and is used with the bridle, worn discreetly under it. It should lay nicely beneath it without interfering with the potential signals from the bridle bit.

Dropping back down the ladder of training is not a shameful thing. Often the next level of training helps to expose and isolate problems that went unnoticed in the previous level. All things that expose a deficiency should be welcomed, for they offer a good horseman the opportunity to work through the problem and present a more solid, “finished” horse in the end.

A Bit of Knowledge

The “two rein outfit” includes the selection of a suitable bit. “Two rein” bits are often slightly smaller or lighter in their make up with more a delicate cheek or design. Though some horsemen simply use a standard bridle bit, others suggest that a more delicately crafted, balanced bit will help to keep the horse’s mouth sensitive during the time it takes him to learn to carry and feel of it.

A “loose jawed” bit, one that is hinged slightly at the end of the bar were it joins the cheek is preferred as some believe a horse is less likely to brace against the feel of a loose jawed bit. A delicate spade, San Joaquin or half breed are commonly used with plenty of copper to promote saliva to form. A horse’s mouth should remain wet to ensure the bit is comfortable and free in it’s movement.

Special care should be taken to find a bit that each individual horse likes, especially in the beginning of the bridling process. Old timers felt that a horse should roll the bit immediately after the horseman picks it up and releases, keeping his mouth closed and comfortable. They claimed a horse that responds in this way likes the bit selection.

A horse’s first experiences with the bridle bit should be positive ones, with comfort and balance tended to by the horseman.

Though the process is easy to understand and logical, executing it correctly is another matter. Herein lies the confusion and mystery of the “two rein.” The reins of the bridle and the mecate are in a constant state of flux. The experienced “two rein” hand knows when and how to ask what.

The task at hand, the speed with which it needs done, the level of the horses training, and the maneuvers being asked for all effect the decisions made by the horseman. Watching a good hand manipulate the “two Rein” correctly is like watching a master flutist’s fingers fluttering over the valves of his instrument. Hundreds of tiny adjustments are made.

Where a horse is in his “two rein” progression determines the kind of message a buckaroo will send to him. Horses that are new to the process will be ridden predominantly in the small bosal with the bridle bit and reins touched little if at all. Gradually, as the horse begins to learn the language of the bridle, he will receive more and more of his signals directly from it with little or no message from the mecate.

Good hands listen to their mounts and try to ride them close to the edge of the horses abilities without exceeding them. Riding close to them puts the horse in an almost constant state of advancement; not exceeding them allows the horse to build confidence and comfort in those abilities. The envelope will widen as the horse’s knowledge grows.

The Task, The Speed, The Maneuvers

The job a horse will be asked to do often determines what signal comes from where. Slow, easy maneuvers might be good opportunities to suggest first with the bridle reins, then supporting with the mecate. Low pressure tasks like moving cows from field to field, or easing up to a gate are a few example of jobs a horse has time to work through. The horse need not respond quickly, giving him enough time to search through the messages and try different responses.

It is here that a green rider makes the mistake of advancing his horse to “strait up in the bridle”, falsely thinking that a horse responding well in a slow situation will hold together in a fast one.

Seasoned horsemen continue with the “two rein” for a time longer as they understand the diversity of work on the ranch. There may yet be situations that have not been explored. The horse may find himself in a situation where excitement or pressure require the rider to again rely on the familiar signals of the hackamore.

Jobs that require lightning speed, like working animals in an alley, hard moves cutting animals out of the rodear or turning a cow down the fence are jobs best initiated with the more direct, familiar pressure of the mecate, then followed with the bridle rein signal. It takes an experienced, patient hand to determine what to use first and how.

The function of the “two rein” is to preserve a horse’s mouth through his transition into the bridle. It is this option of returning to the original signals of the hackamore in times of confusion that helps to maintain this. Remembering that the bits used in these disciplines are signal bits, not leverage bits. Signals must be introduced and learned by the horse.

Once a horse has proven himself to be comfortable and responsive in a myriad of situations, over a period of time, he will be ready to advance into the buckaroo’s pinnacle of achievement, “straight up in the bridle.” The subtle shadings and adjustments constantly made with the “two rein” are what pave the way for the horse’s eventual solo voyage. The transition, if done right, appears effortless. 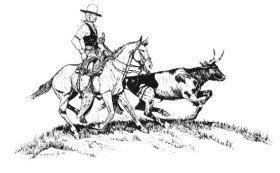 Why has something so logical and precise fallen from favor? The majority of average horsemen have never seen a “two rein” in use and if they have they have very little knowledge of its function. Outside of the buckaroo and old California horseman’s circles, the “two rein” is practically nonexistent. Some shows have a token class here and there but there is no substantial purse to be one, no accolades to claim.

The modern day horse trainer is in a hurry. Most of their clients made them that way. As training bills mounted, owners wanted results – the quicker the better. Trainers responded by trying to get more done, faster. They focused on the big, easily recognizable advancements. Something a novice owner could see and understand. Small, subtle improvements were hard to prove and even harder to show when the owners came calling. Progress in the “two rein” fell into this category. Only the best of horsemen could appreciate the tiny changes that built a solid bridle horse. Trainers dumped the “two rein” for quicker fixes. It did not matter that the quick fix didn’t last, or created other problems in the horse. Time, unfortunately, was money.

The buckaroos continued the age old practice. They had already confronted and made the choice of life-style and experience over money. They wouldn’t be out on the ranches working for a cowboy’s wage if they hadn’t. Time belonged to them when it came to their horses, and the good ones spent it happily.

As with all things subtle, they often go unnoticed. So it is with the mastery of the “two rein”. The “two rein” is the melody and the harmony of the bridle horseman – the blending of unlike elements to create a solid, pleasing, balanced result. Though its execution takes time to learn, the resulting music is worth the wait.

The above discussion is printed with permission from the author, Gwynn Turnbull-Weaver.
The Californios
PO Box 635
Orland, CA 95963
www.thecalifornios.com