Vaquero Stories we hope you will enjoy!

I traded for a horse one time,
he wouldn’t take no beauty prize;
A great big long-eared, blue roan gelding,
not too bad for weight or size.

I had to make some tough old circles
and this trader guaranteed
This horse would show me lots of country
and not need too much rest or feed.

He said “Now this here ain’t no kids’ horse
but he’ll pack you up the crick,
He will hump up on some occasions
and he has been known to kick.

I wouldn’t trade him to just anyone
without having some remorse
But if you’re a sure enough cow puncher,
mister, he’s your kind of horse.

I stepped on that horse next mornin’;
he began to buck and bawl.
That trader maybe hadn’t lied none,
but he hadn’t told it all.

Because we sure tore up the country
where he throwed that equine fit
And I almost ran out of hand holds
by the time he finally quit.

I guess that musta’ set the pattern;
things just never seemed to change,
Although I showed him lots of country,
every corner of the range.

But every time I’d ride that booger,
why, he’d keep me sittin’ tight.
I knew I’d make at least three bronc rides
‘fore he’d pack me home that night.

Which woulda been OK
with lots of horses that I knowed.
But that old pony had my number;
I’d just barely got him rode.

And the thing that really spooked me
and put a damper on my pride
Was he was learning how to buck
faster than I was learnin’ how to ride.

I pulled into camp one evening;
it was gettin’ pretty late.
I see this grey horse in the corral
and there’s a saddle by the gate.

I looked that grey horse over
and I sure liked what I seen,
Then this kid showed up around the barn;
he musta been about sixteen.

He said he’d lamed that grey that morning
coming down off the granite grade,
And he wondered if I had a horse
I’d maybe like to trade.

He said he didn’t have the time to stop
and rest and let him heal,
And since that beggars can’t be choosers,
he’d make most any kind of deal.

When a feller’s tradin’ horses,
why, most anything is fair,
So I traded him that blue roan
for his grey horse then and there.

But then my conscience started hurtin’
When I thought of what I did,
To trade a “fly blown” dink like that
off to some little wet-nosed kid.

So next mornin’ after breakfast,
why, I tells him, “Listen lad,
If you want to know the truth,
that trade you made last night was bad.

That old blue horse is a tough one,
bad as any one you’ll see.
He’ll kick you, strike you, stampede.
He’s a sorry SOB.

“It’s all I can do to ride him
and I’ll tell it to you straight,
I think you’ll be awfully lucky
just to ride him past the gate.

There’s two or three old horses
out there in the saddle bunch.
They ain’t got too much going for ’em
but I kinda got a hunch

“They’ll probably get you where you’re going
if you just don’t crowd ’em none,
But damn, I hate to see you ride
that blue roan booger, son!”

He said, “I told you there last night
I’d make most any kind of trade,
And I appreciation your tellin’
what a bad mistake I made.

“But my old daddy told me when you’re tradin’
that no matter how you feel,
Even if you take a whippin’
that a deal is still a deal.

That horse, you say has lots of travel,
and he’s not too bad for speed.
Well, sir, I’m kinda’ in a tight
and that’s exactly what I need.

“I traded for him fair and square
and damn his blue roan hide,
When I pull outta’ here this morning,
that’s the horse I’m gonna ride.”

I watched him cinching up his saddle
and he pulled his hat way down,
Stepped right up into the riggin’
like he’s headed straight for town.

Stuck both spurs up in his shoulders,
got the blue roan hair a-flyin’
Tipped his head straight back and screamed
just like a hungry mountain lion.

You know, I’ve heard a lot of stories
’bout the bucking horse ballet.
I’ve heard of poetry in motion,
but the ride I saw that day

Just plumb complete defied description
though I can see it plain,
Like it had happened in slow motion
and was branded on my brain.

I don’t suppose I could explain it
to you even if I tried.
The only thing that I can say is,
by the saints, that kid could ride.

He sat there plumb relaxed
like he was laying home in bed,
And every jump that pony made,
that kid’s a-half a jump ahead.

When it was over I decided
I could learn a few things still,
And I said, “Son, I’m awfully sorry
I misjudged your ridin’ skill.”

He just said, “Shucks, that’s OK, mister,”
as he started on his way,
“But if you think this horse can buck,
don’t put your saddle on that grey.” 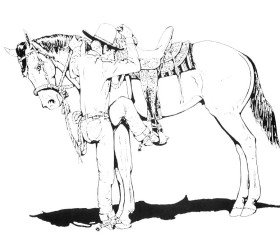 The Fence that Me and Shorty Built

We’d picked up all the fencin’ tools,
and staples off the road.
An extra roll of ‘bob’ wire
was the last thing left to load.

I drew a sleeve across my face
to wipe away the dirt.
The young man who was helpin’ me
was tuckin’ in his shirt.

I turned around to him and said,
“This fence is finally done.
With five new strands of ‘bob’ wire
shinin’ proudly in the sun.

The wire is runin’ straight and tight

with every post in line.
The kind of job you’re proud of,
one that stands the test of time.”

The kid was not impressed at all,
he just stared off into space.
Reminded me of years ago,
another time and another place,

When I called myself a cowboy,
I was full of buck and ball.
I didn’t think my hands would fit
post augers and a maul.

But they sent me out with Shorty,
and the ranch fence buildin’ crew.
Well, I was quite insulted
and before the day was through,

I let him know that I’m a cowboy,
this ain’t what I do.
I ain’t no dadgummed nester,
I hired out to buckeroo.

He said, “We’ll talk about that son,
when we get in tonight.
Right now you pick them augers up.
Its either that or fight.”

Boy I was diggin’ post holes
faster than a Georgia mole.
But, if a rock got in my way
I simply moved the hole.

So, when the cowboys set the posts,
the line went in and out.
And ole’ Shorty’s face got firey red
and I could hear him shout,

“Nobody but a fool would build
a fence that isn’t straight.
I got no use for someone who
ain’t pullin’ his own weight.”

Boy, I thought for sure he’d hit me
I’m glad he didn’t have a gun.
I turned around to find a place
where I could duck and run.

But, Shorty walked up to me
just as calm as he could be.
Said “Son, I need to talk to you.
Let’s find ourselves a tree.”

Well he rolled a Bull Durham cigarette
as we sat on the ground.
He took himself a puff or two
and slowly looked around.

“Son, I ain’t much on schoolin’,
didn’t get too far with that.
But there’s a lot of learnin’
hidden underneath this hat.

And I got it all the hard way,
every bump and bruise and fall.
Yeah, some of it was easy,
but most weren’t fun a’tall.

But one thing that I always got
from every job I’ve done,
is do the best I can each day
and try to make it fun.

I know that bustin’ through them rocks
ain’t what you like to do.
By gettin’ mad you’ve made it tough
on me and all the crew.

Yeah, you hired out to cowboy
and you think you’ve got the stuff.
And you told him you’re a good hand
so the boss has called your bluff.

So how’s that gonna make you look
when he comes ridin’ through,
and he asks me “Who dug them holes?”
and I say it was you.

Now, we could let it go like this
and take the easy rout.
But doin’ things the easy way
ain’t what its all about.

Cause the boss expects a job well done
from every man he’s hired.
He’ll let you slide by once or twice,
then one day you’ll get fired.

If you’re not proud of what you do,
you won’t amount to much.
You’ll bounce around from job to job
just slightly out of touch.

Come mornin’, lets re-dig those holes
and get that fence in line.
And you and I, we’ll save two jobs,
those bein’ yours and mine.

And someday you’ll come ridin’ through
you’ll look across this land,
And see a fence that’s laid out straight
and know you had a hand,

In something that’s withstood the years.
Then proud, and free from guilt,
You’ll smile and say, “Boys, that’s the fence
that me and Shorty built.”

The Man in the Glass

When you get what you want in your struggle for self,

And the world makes you king for a day,
Just go to the mirror and look at yourself,
And see what THAT man has to say.

For it isn’t your husband or mother or wife
Whose judgment upon you must pass.
The fellow whose verdict counts most in your life
Is that man staring back from the glass.

Some people may think you’re a straight-shootin’ chum,
And call you a wonderful guy,
But the man in the glass says you’re only a bum,
If you can’t look him straight in the eye.

He’s the fellow to please, never mind all the rest,
For he’s with you clear up to the end.
And you’ve passed your most dangerous, difficult test
If that man in the glass is your friend.

You may fool the whole world down the pathway of years,
And get pats on the back as you pass.
But your final reward will be heartaches and tears
If you’ve cheated the man in the glass.