Origin of the California Vaquero

The origin of the California Vaquero dates back to the 1770’s, long before old California joined the rest of the United States. The Spanish conquistadores had a big hand in getting this horse unit going, and its members were selected from the Indians along the mission trails. A recruiting job had to be done and it’s doubtful there were any forms to fill out. It’s likely that the ones who showed an interest in horses were chosen right off the bat. 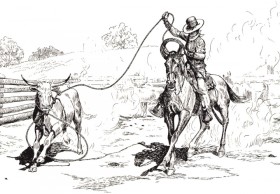 School was held in the field every day, and the instruction was in Spanish. The riders were told “Your reason for learning to ride these caballos (horses) is to look after the vacas (cows).” When one of the students became a journeyman, he was awarded the supreme title of a vaquero; this title or rank was given to a great many of these stock-tenders through the years, up to the 1920’s and 1930’s.

The California vaquero had a heap of time on his side, plus the weather helped him along, giving him all it took to get his lessons down. Competition ran high, adding to an already unbeatable scholarship on the oak-studded ranges.

In the early days of fiestas and siestas, the ol’ boys made most of the horse gear that they used, for there were no shops in which to purchase it. Again, this is where time played a big role in the life of the vaquero, as making these items took a lot of it.

First, an old, thin cow provided material for the job. She had to be killed and undressed with a sharp knife, then a string had to be made of this pelt of rawhide, so that ropes, hackamores, bosals, quirts, reins, etc., could be fashioned. Selecting the right hide to make a piece of gear, and getting it to be eye-appealing, takes an expert rawhide worker. With their scores ofmanañas, the old masters turned out beautiful works of art for their own use and the use of other vaqueros and buckaroos. A lot of pride was invested in all of these pieces, so it goes without saying that a horse wearing this kind of jewelry performed in a top manner.

If we could bring back some of those yesterdays of the heyday of the vaquero, it would raise the eyebrows to the hairline on just about every horseperson is my guess., and I don’t think I’d miss it by an inch.

The buckaroo’s day often started at two or three in the morning, for he had a long ride just to get to the cattle or to the place where the cattle would be feeding in a clearing, if it was brush country. There were no stock trailers to take him to where the cattle were, so it was ride, cowboys, ride, usually in the dark. (There are still some places in the West where these practices are common, except that they have a little more modern flavor.)

The horse that was used had usually been tied in the barn and fed a good bait of hay in the manger (some of these old barns still stand). Other times, the caviada was run in from a small field, using a horse that was kept up especially to bring them in; this horse was then unsaddled and only the ones needed were caught for the day’s work. The rest were turned out to pasture until their turn came. 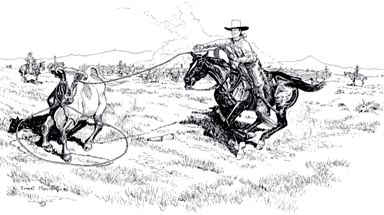 After feeding his horse some oats and saddling up, the vaquero or buckaroo would get himself a big breakfast because he probably wouldn’t have a chance to eat again until late in the evening, if at all. (I’ve experienced plenty of those days myself, days when my belly button made love to my backbone. And by golly, none of the men I’ve ridden with ever complained at all about the lack of a noon meal – most of the time, we were so busy we didn’t have time to think about food).

The word “buckaroo” is tied very closely to the word “vaquero”. Around the time California became part of the United States of America, the name buckaroo was heard as much as vaquero. By and large, the vaquero was brown-skinned and the buckaroo was white. But as the sun rose and set many times, the titles became interchangeable, until they sort of ran together, like “baquero,” or so it sounded to me. A great many white men made an effort to become equal to their brown-skinned counterparts, and while riding stirrup to stirrup, they learned to speak each other’s language. I’ve known many top buckaroos and vaqueros of both races, and, although I don’t consider myself a one-man judge and jury, I’d have to declare them equal on all counts…and that’s not putting it mildly.