About Ernest Morris
Ernie was born December 13, 1927 in the rural community of Fellows in Kern County California. He is a fifth generation California cattlemen on both his mother’s and father’s side of the family tree, and he is a great grandson of the late Samuel S. Jobe, a Pony Express rider and stage coach driver.

Ernie spent much of his youth on the family ranch in Kings County California. After the tragic accidental death of his father when Ernie was 12 years old, his family moved to the Paso Robles area of San Luis Obispo County California to be closer to other family members. During his high school years Ernie began working on various ranches of the central coast area of California where he worked with older men who followed the California vaquero horsemanship style. There he found the beginning of a fascination that has lasted throughout his life.

Ernie especially credits his grandfather, Jesse Wilkinson, with teaching him many of the vaquero ways and techniques for making quality rawhide equipment. Jesse was well-known in the central coast area of California as an excellent vaquero and a master rawhide worker. More can be learned about Jesse Wilkinson on another page of this website.

On March 10, 1954 Ernie and his wife Blanche were married. They eventually settled to their ranch near Templeton in San Luis Obispo County where they raised Blanche’s two children, Linda and Ralph. They have four grandchildren and seven great grandchildren. One can quickly calculate that Ernie and Blanche have a relationship that has extended several decades.

Ernie’s art talents began to show at an early age, with special interests in the California vaquero. Vaquero art was a hobby until 1964 when he took up art as a full-time occupation. In 1967 Ernie began placing a small hackamore beside his name on his paintings as a symbol to connect his art and his rawhide work.

Ernie prides himself in creating authentic vaquero remembrances in all aspects – people, horses, equipment, cattle, terrain, livestock situations, etc. He has created vaquero art with pen & ink, pencil, charcoal, watercolor, oils, acrylic, bronze sculpting, wood carving, rawhide braiding, and horse hair mecates. His paintings and drawings provide a vivid and colorful replay of his personal experiences while working on various ranches in his younger days, and the many stories told to him by “old-timer cowboys” he has known. His art, rawhide work, and books have been featured in galleries, museums, and private collections throughout the United States and many parts of the world. 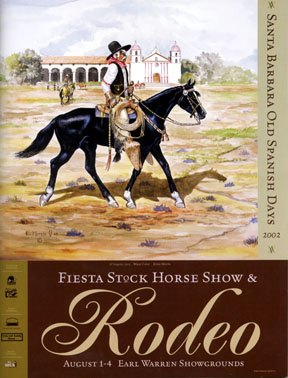 In 2006 Ernie received the “Vaquero Craftsman” award from the Santa Ynez Valley Historical Society associated with their annual Vaquero Show. The picture Ernie painted for the Vaquero Show poster is shown below. 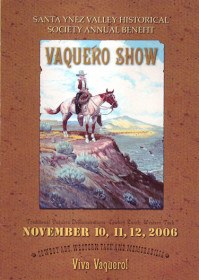 Although Ernie’s art encompasses most of his time, he is active in the cattle business, training his own ranch horses, braiding rawhide gear, and occasionally making horse hair mecates. Ernie and Blanche reside on their ranch near Templeton, California where they enjoy western art, horses, cattle, and friendly conversation.

Ernie and Blanche have worked side-by-side throughout his career. After more than 50 years of exhibiting at numerous special events throughout California and in many areas of the western United States, Ernie and Blanche decided to retire from exhibiting art shows. They continue offering Ernie’s art work at their studio and gallery located at their ranch.

~ The following postscript was added by Ralph Pavey ~

I have had a special closeness to Ernie since I was a small child.  He and my mother, Blanche, were married the year following the untimely death of my father.  Since that time I have known Ernie as “Dad”.  We have spent countless hours together training horses, branding calves & doctoring cattle, holding our own private horsemanship competitions, agonizing over livestock losses, discussing the meaning of life, both cussing and praising the actions of government, and all of the other things that are a typical part of ranch life.  Throughout this time we have had a special bond that has been as good as any father and son relationship could ever be.  He has stood firm in his principles of hard work and honesty, and he has maintained an unending sense of humor.  He is truly a remarkable man to me, and I am proud that he is my best friend and my Dad. 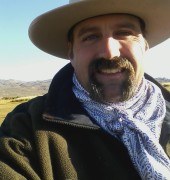 One Of The Best

I was lucky enough in my life
to meet and visit with one of the best.
A man that stands out through his many achievements,
well above the rest.

He learned from older men who knew
the art of vaquero trade.
Through their teachings,
another great vaquero was made.

He learned how to start a colt
and take him from Jaquima to Freno,
a velvet mounted wonder.
While many other men would sit around and ponder.

Could this be done?
Could a man with this ability be real?
To know all the aspects of horses
timing and feel.

The slightest whisper of the reins could make the horse slide,
stop or spin with the greatest of ease.
The type of pony a puncher
would be proud to have between his knees.

With a ninety foot riata in hand,
he demonstrated his skills at the vaquero show.
He would build a big California loop,
then with a couple of smooth swings,
he’d make a perfect throw.

Though his talents do not stop there,
they are only just the start.
He is a master of many,
types of art.

From several types of rawhide work
and bronzes to pen and ink, and carvings in wood.
With all of his finished products
being incredibly good.

Though through all of his great achievements
that you could hang on the wall.
Ernie Morris is one of the nicest and generous men that I’ve ever met,
who took his time to help me with a question,
and to me that’s the greatest achievement of all.

His granddaddy once lived the life
And a string of men before him
From Mexico and far-off Spain.
They passed it on, like breathing.
How to sit a caballo ramrod straight.
How to make it move, like water.
How to work the reins with a feather-touch
While you stalked a mean cow-critter.
His hands are hard as Hereford horns
From braiding his reattas,
An art bequeathed from man to man
Since the first conquistadores.
He can name the names of old-timers
And tell you what they taught him.
He can name the names of long-dead mounts,
Like a heavenly remuda.
The old vaquero.  He has lived the life,
Harsh–and blessed as freedom.
Now he sits his horse and views the hills
While history whispers through him. 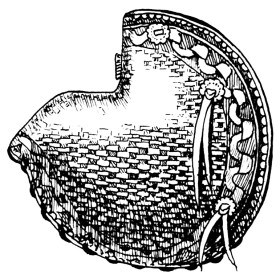