A unique legacy of the California vaquero is Figure-8 roping from horseback. This special 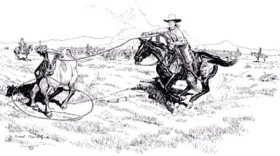 catch allows one cowboy to easily and humanely restrain an animal’s movement in preparation for any necessary on-the-spot doctoring or special handling. Unlike conventional roping techniques, the animal is caught with one rope that forms a double loop. The loop goes around the animal’s head, crosses over in front of it’s chest and forms a figure-8, then goes around both front feet. When slack in the rope is removed and dallies taken around the saddle horn, the loop tightens and gently draws the animal’s head and front feet together. The animal’s ability to make quick and agile maneuvers is substantially reduced. A skilled cowboy can then begin the process of administering any necessary doctoring or special handling.

A skilled roper can make a figure-8 catch look easy, smooth, and graceful. However, a lot of “feel” and timing is involved in making 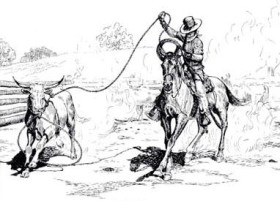 the catch. The “feel” and timing is developed through refinements made during many figure-8 practice attempts. Like most ranch roping activities, rope lengths are often 50 feet or longer. Cooperation between horse and rider can often make or break a good catch. Probability of a successful figure-8 catch usually improves when the animal is going in a straight direction, at a consistent speed, and not in close proximity to other animals, trees, fence posts, etc. The roper’s position and distance from the animal when the loop is thrown can be important. Loop size can also be important – large enough to form the figure-8 for catching the animal’s front feet, but not so big that it might catch something else. Swing angle and timing of the loop release can influence the rope’s flight path toward the animal. A loop thrown either too soft or too hard may not form the figure-8 when it arrives at the animal. The “honda” location when the loop makes contact is important, usually best if it is high on the animal’s neck near the back of the head. A practicing roper may want to experiment with different “spoke” lengths to see how it influences the loop when it contacts the animal.

A few traditional ranch-style rodeos hold figure-8 roping contests. Contestants are often scored on a points system, such as 11 points for a figure-8 catch with the head and both front feet, 5 points for the head and one front foot, and 0 points for any other catch or a miss. Each roper usually gets approximately three animals to rope. The winning contestant is the one with the highest total points. Tie scores can be resolved by elapsed times (shorter time is superior to longer time) or by continued roping of additional animals until the tie is broken. Contestants are disqualified if an animal is handled roughly. 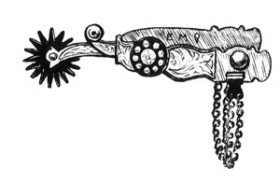