Rawhide is the untreated hide of an animal that remains in its natural state.

Rawhide has been used for many different purposes for thousands of years. Cowhide (from cattle) is the most common source of rawhide because it is most readily available, it adapts to many uses, and it is tough and long-wearing. 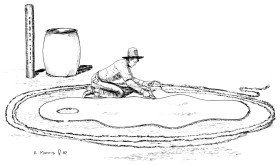 Animal skins were used as garments during the Stone Age (approximately 20,000 BC) for protection from the elements. The Bible makes frequent references to the use of leather and animal skins. Evidence exists for the use of leather by the ancient Sumerians as far back as 6,000 BC. Egyptian stone carvings made about the same date show leather workers. Pieces of leather and items made from animal skins have been found in Egyptian tombs that date back to approximately 2,500 BC.

The Moors, who lived along the seacoast of northern Africa, crossed the Straits of Gibraltar (located between northern Africa and Europe) and conquered Spain in the year 711. The Moors took with them their knowledge of braiding and leather craft. Domination of Spain by the Moors lasted until 1492. During this period of time the art and style of braiding in Spain advanced significantly.

Hernando Cortez and his Spanish conquistadors invaded Mexico in 1519, and eventually overpowered the Aztec leadership of Mexico in 1521. Cortez is credited with introducing horses to North America. The conquistadors who accompanied Cortez were skilled in the art of leatherwork and braiding, and they taught the native Indians of Mexico how to braid and work with leather and rawhide. This became the foundation for even greater improvements to the rawhide braiding craftsmanship that would follow.

Some descendents of the conquistadors became owners of large estates in Mexico. These large estates were called haciendas. The men who were employed to handle cattle on these haciendas were known as vaqueros. Vaquero is the Spanish word for cowboy. The Mexican vaqueros took pride in their horsemanship, and in the use and appearance of the leather and rawhide equipment they used.

The Mexican vaquero migrated northward with the cattle industry into the ranchos of “Alta” California. This migration followed primarily along the trail of the California missions. The vaqueros took with them the art of rawhide braiding. Pride and the competitive nature of these “rawhiders” elevated braiding into distinctive and beautiful classic styles. Vaqueros used many types of fancy braided rawhide horse equipment during their daily activities. It was common to see vaqueros using braided rawhide headstalls, bridle reins with romal, riatas, hobbles, quirts, hackamores and bosals, and other types of horse gear. The vaquero took special pride in having good quality braided rawhide equipment and a well-trained horse. 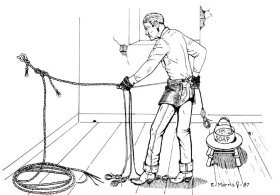 This art of rawhide braiding advanced significantly in California until around the late 1800s and early 1900s. Much of the art of braiding has been closely held “secrets” that were handed down from father to son, or from one trusted companion to another. Because of the many and varied intricacies of rawhide braiding, it takes many years for an apprentice to develop to a high quality level, even under the tutelage of a seasoned veteran.

In the early 1900s, employment on the ranches of California began to change. The sizes of ranches began to decrease, cattle handling styles began to change, and the demand for the flashy style of the vaquero began to diminish. Many young vaqueros began to discover other sources of employment at higher wages and easier work. Other types of equipment began to be used as the migration of people to California from other areas brought with them different types of tack and equipment. In the 1920s and 1930s the grass rope began to be used because it was cheaper for a cowboy to replace an entire broken grass rope than it was to repair or replace a riata. These and other changes brought about a decrease in the demand for rawhide braiding by horsemen who used it in their daily horsemanship activities.

Although demand has changed, the smooth and artistic style of the vaquero, including the use of good quality rawhide horse equipment, has extended longer in California than in any area north of the Mexican border.