The Inside Scoop (Ernie Morris)

California vaquero artist and horseman Ernest Morris describes the reasoning and necessity behind the detail in his painting titled “His Kingdom.”

A commercial free episode of The Horse Show with Rick Lamb featuring the history of and current Vaqueros including Ernie Morris.

Dang Erous
This was interesting. As info to many commenting, caballo is horse in Spanish. Caballero is horseman, gentleman and knight, the latter coming from the medieval period because then the horseman (of nobility, military or both) was and had to be much more than just a man riding a horse (no peasants could ride only work from the ground). Vaca is cow, so vaquero is cattle hand, ranch hand, herdsman, in short everyone who worked cattle. In Spain 99.9% of vaqueros obviously also rode and still ride horses. The conquerors (conquistadores) took their lifestyle with them.
Lohaiza 21
Vaqueros originated in Mexico not Spain. Spaniards were not vaqueros they were Ganaderos. They just tamed cattle with horses and stuff. But the true Vaquero Traditions are of Mexico origin they were developed by the Mestizos. The cowboy hat and boots and all that cool stuff you see originated in Northern Mexico. Spaniards didn’t have that stuff. Charros are the ones who wear the sombreros vaqueros wear the cowboy hat.
EL AVENTURERO
I’m from mexico and I’m charro and we are also know as vaqueros and we know vaqueros from california as californios and tejanos vaqueros from tejas.. TEXAS..
buckaroojohn
A fantastic history of the californio vaquero- thanks to Rick Lamb !!

2011 was the fifth year for Light Hands Horsemanship and again it proved to be unlike any other event. Attendees came from 14 states and 10 countries including Canada, Australia, New Zealand, Argentina, Uruguay, France, Germany, United Kingdom, Scotland, Sweden and Norway.

Presenters this year included Eitan Beth-Halachmy, Richard Winters, Jon Ensign, Lester Buckley, Jack Brainard, Dr. Robert Miller and Rick Lamb. All presenters focus on a light handed approach to horsemanship but each has their particular perspective to offer. Those in attendance receive the best education in Light Hands Horsemanship available. Each of these presenters are dedicated, sincere, funny and most importantly they are excellent teachers. They joke with each other, with attendees, share camaraderie and just really have a good time.

This year’s event celebrated the Californian Vaquero. Sheila Varian and Ernie Morris — two people that illustrate the style and philosophy so well — presented this year. Sheila, owner of Varian Arabians, was influenced by Tom Dorrance in the 60’s and his “soft approach” to training and interacting with horses. Ernie Morris is an artist that works to maintain the California Vaquero history and tradition. Ernie has celebrated the California Vaquero in tack, paintings, sculpture and as an author. Both Sheila and Ernie added a true Vaquero feel to LHH this year.

Light Hands Horsemanship 2012 will be held May 31 through June 2nd. Eitan, Richard, Jon, Lester, Jack, Dr. Miller, Rick and Sheila will be presenting in 2012. They will be joined by Leslie Desmond, co-author of the famous Bill Dorrance book, “Horsemanship Through Feel”, many other books and DVDs, trainer of trainers and educator for the “finer points of feel and release.”

Spalding Labs continues to sponsor Light Hands Horsemanship. Tom Spalding supported the event when it was just an idea brewing and has continued to support it for the last five years and will do so again in 2012. It takes many dedicated, hard working people to produce an event of this caliber and the folks at Spalding Labs are proud to be among the many that makes Light Hands Horsemanship possible each year. 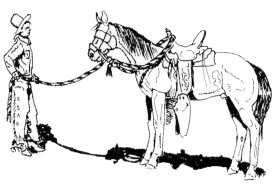